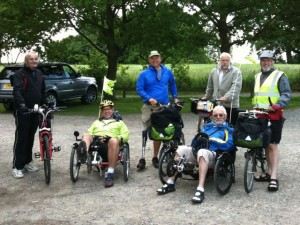 The road to Ellesmere wasn’t entirely trouble free – a motorist running into a bridge at Gobowen made sure of that – but for a Friday afternoon things turned out quite well.

Rolling into Shrewsbury station, a mere 10 minutes away from Gobowen, the guard announced the train was detouring direct to Crewe. That left us on the station platform watching the ensuing confusion while the iPhone Map and National Rail App came up with an alternate station and the next train there.

The back lanes from Wem were delightful and we rode into Ellesmere entirely relaxed. Nobby, Dave and Peter had ridden in from Whitchurch a little earlier and we checked out the route options for Saturday over a meal and a pint.

With Tim and Frank joining us on their trikes in the morning, the magnificent seven (Calamity Brigitte is behind the camera) set off for a ten mile loop of lanes, meers and canals.

North Shropshire is very wiggly, both laterally and vertically, and it’s rare to meet a car going too fast in the lanes. The network of lanes is so extensive and so pleasant that it appears motorists aren’t used to seeing cyclists on the A roads – at least that’s how it seems. But then impatience and the constant desire to instantly be somewhere else isn’t limited to Shropshire.

For me, the terrain is ideal. Not so hilly or steep that I have to buckle down at the bottom of every hill and slog up it, but interesting enough to take ones mind off the effort and enjoy a new view every few minutes.

However, it’s not the same for all of us. Peter, working to improve his fitness after a triple heart bypass, made an interesting observation; he felt like the most disabled cyclist on the ride.

Some of us hobble, wobble, wheel and limp around most of the time, but once we get on a bike, trike or handcycle we’re liberated, and what was a struggle becomes a breeze in comparison. For some less obvious disabilities, limitations of the heart or the lungs, the extra cardiovascular effort of cycling up hills can be too much. Frank, a veteran of less intrusive heart surgery, has learnt to live with the limitations it imposes so successfully that I think many would be completely unaware of it. But if the red line on the body’s rev counter can’t be increased, perhaps that’s where electric assist comes into it’s own.

We rode a little longer than we would ideally have liked to the coffee stop, but when it came it was a good one. The visitor centre on Ellesmere’s Mere does proper coffee and great cakes. These geese and their goslings were particularly appreciative of Nobby’s carrot cake and the stomach op that allows him to share it so freely.

Plenty of time to talk cycles – Frank’s version of ICE’s Vortex 2 was much admired, dissected and discussed.

I was made aware of a possible solution to the chainguard that no longer fits my Trice after switching to a 20T chainring to reduce the gearing further.

Tim’s wish to try a different crank length reminded me I have a 155mm crankset languishing in the garage (must dig that out for him in the morning!) and raised the question of whether as a group we should have some adjustable length cranks to loan to members – committing to a custom set could be a costly mistake if you guess at the wrong length. 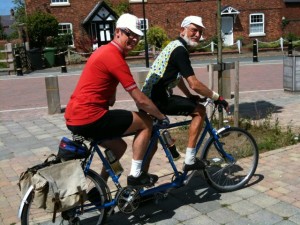 Then on into the town centre and down to the Wharf to watch the narrowboats turning. Here we met Ian and his Dad from Wem taking a break from a day in the lanes.

Their ’52 James tandem initially drew my attention because of the single sided handlebar for the stoker – Ian explained he has Cerebral Palsy significantly affecting his left side. He also has a number of home made trikes, both upright and recumbent.

The tandem has 26″ wheels in a 700C frame and forks, a trick I’ve been trying to pull off to effectively drop the bottom bracket height on an off-the-shelf frame. The stumbling block for me has been getting caliper brakes with the necessary drop to reach the wheel rim. The elegant solution they employed here on the tandem is a pair of BMX calipers – it’s good to talk 😮