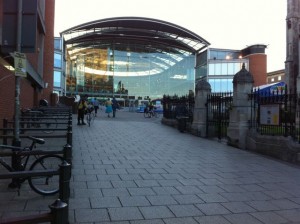 Milling around outside The Forum we attracted a number of people interested in the cycles. Tom who works in the building services department there came out for a chat. He’s touring the coast of Britain on a part time basis, picking the route up again at Thurso at the next opportunity.

We were able to introduce him to Chris of the Norfolk and Norwich Association for the Blind. The NNAB’s cycling outings have tailed off recently because they’re down to their last tandem pilot, something Tom has been thinking of volunteering for – serendipity strikes again!

When it comes to cycling, associations for the blind and the Tandem Club have a particular affinity. I think it’s fair to say that most visually impaired riders do little utility cycling, except perhaps couples, because of the need to have a partner. But on the scale of ability they’re often some of the quickest on the road.

Cycling and visual impairment isn’t always a happy marriage. I remember hearing a highly contentious piece on Radio 4’s You and Yours about the design of shared space which seemed very polarised. Perhaps cycling members of the RNIB know of a tactile solution that the engineers are currently missing?

In the meantime, Ruth had picked up her library book, and once I’d dragged myself away from a discussion on Brompton gear modifications, we were on our way. 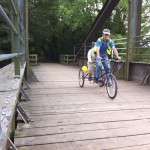 There are flat areas in Norfolk, but you really wouldn’t know it riding around Norwich. However, the section of the Dover to John O’Groats NCN 1 that we were using, Marriotts Way, is a disused railway path and graded accordingly. Gordon, Chris’s pilot, gave us some background; Marriott was an engineer whose claim to fame is the concrete sleeper – a far better use of that material than multi storey carparks I think. Mike piloting Katie on the tandem trike knew the trail very well. Upright trikes make it easy to get on, and are good when moving slowly, but require experience and skill to handle on very uneven surfaces.

In addition to the ride we also had a meeting in The Forum. An architecturally interesting and pleasant space to be, the building houses BBC East and Radio Norfolk, the library, an auditorium, tourist information, a coffee shop, a (fully booked) Pizza Express and our meeting room The Cube.

It was great to finally meet Martin, although for reasons discussed in ‘Inclusive Cycling, Exclusive Cycles’ it’s disappointing that he’s still prevented from riding with us. Solutions to that, our campaign aims, the Cycle Show and our AGM in October were discussed. That’ll pretty much wrap things up for 2010 I think – in terms of rides and meets anyway. Anyone with a suggestion for a meeting place next year do let us know – you can even visit us at the Cycle Show to talk about it or the AGM in Birmingham.

The C&CC campsite was very convenient – you wouldn’t think camping in a small field sandwiched between two rail lines, the A146 and the A47 would be that pleasant, but they’ve got a jolly nice shower and at £6 a night it’s a bit of a bargain. Oh, and Nobby, Dave and I can recommend Frank’s Bar in Ye Olde Norwiche.