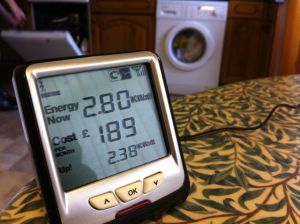 You know civilization is advancing at warp speed when your toaster wakes you up, tells you the time in Tokyo and displays the state of play, via twitter pic, of the carcinogised crispiness of your optimised bread product.

Can-openers with mains leads, tooth brushes with massage settings, so much choice but so few sockets – what’s a 21st century eco-warrior to make of it all?

Well fear not fellow waste watchers, for here is one wifi-display-with-a-mains-lead to rule them all. What’s more it’s free to use and it’ll save many times its weight in equivalent CO2 emissions, once that is, it’s finished saving YOU money on YOUR electricity bill. All hail – the Current Cost Meter.

What does it do? It displays the energy currently being consumed in your home and how much that energy is costing you. How does it do it? Short answer – magic.

I found it’s good for two things – one, gaining an understanding of what (or who) the heavy energy users are in your home, and two, finding those appliances that don’t use a lot but are doing it constantly. Our cooker’s got a timer and displays the time, it’s uses about 10W to do that which doesn’t sound a lot, but still works out at more than 80kWhrs or £10 over the year. (Based on 12pence per unit)

When I started we had an overnight background power use of about 75W (equating to around £75/annum). By deciding what we do and don’t need on, and juggling things to separate what we want to turn off easily, we’ve  got that down to under 25W, or £50 in the bank.

Basically, if it draws a lot of power you don’t want it on for long, and if it’s on for a long time you want the version that draws the least power. What the Current Cost Meter does so well is to convert all that into money so you can make an informed choice. 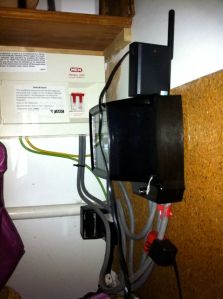 It’s easy to set up. Clip the sensor (black and red thing at the bottom of the pic) around the incoming mains cable, and plug that into the transmitter (the black box at the top). Plug the display unit into a mains socket and it’ll probably start working straight away. If not a simple “mating” procedure is required to couple the wireless transmitter to the display by pressing a red button.

There are a couple of little niggles. The display needs to be plugged into a wall socket, so moving around the house with it, turning things on and off as you go, isn’t as easy as it might be. The display updates every two or three seconds which sometimes means the change due to the light you just turned off is obliterated by the fridge cutting in, but you soon get the hang of it.

These aren’t show stoppers by any means, and with energy costs on the rise this will be time very well spent.