In between “Sweet Gene Vincent” and “Hit Me with Your Rhythym Stick”, Ian Dury penned a ditty about doing the right thing – in his case playing the fool in a six piece band.

As far as I recall, back in 1978 waste as a topic only made the news under the umbrella of “The Winter of Discontent”; pictures and VT of bin bags taking over the streets, juxtaposed with picket lines of bell bottoms, platforms and sideburns.

I don’t remember anyone questioning where those piles of rubbish usually ended up, nor what would happen if it continued ad infinitum, it just mattered that they were damn smelly and needed to be downwind and out of sight. But we were in the dark ages back then – despite the advent of the disposable Bic biro, their razors still only had one, unscientifically proven blade.

Another defining moment in the seventies was our joining the EEC, now the European Union. Infamous for the mythical straight banana and various other mischievously reported bureaucratic regulations, it turns out that the EU has played a major role in getting waste out of the bin and back on the table in the UK. 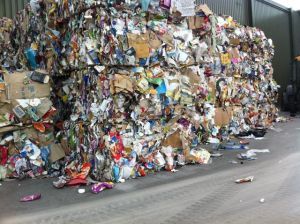 A glance at the Gazette’s letters page might lead you to think otherwise, but the new waste contract awarded to May Gurney by West Oxon District Council could be the most progressive policy on domestic waste to be implemented in the UK. And it all stems from one despicable european dictate – the Landfill Directive.

Incentive’s are notoriously difficult to get right, just take a look at Freakonomics to get a flavour of how they are often counter productive. Hugh’s Fish Fight is currently campaigning against one the EU got wrong – fishing quotas. But if there’s an exception that proves the rule it’s probably putting a cost on landfill.

Placing a financial value on dumping through regulation that makes recycling economically sensible allows a budget constrained council to do the right thing. And while visiting May Gurney’s site off Downs Road, I got the sense that doing the right thing probably plays a large part in the enthusiasm of the councils’ officers for getting this right and making it a success.

It’s not all down to them though, we have a part to play in getting it right with waste in Witney and West Oxon, and you can look forward to more posts from our Bin Champion on how to make recycling work better.

I came away pondering the tantalising notion, and real possibility, of “zero domestic waste” – ie, no household waste going to landfill. And that raises a question, what happens to the other 70% of waste in West Oxon that isn’t domestic?