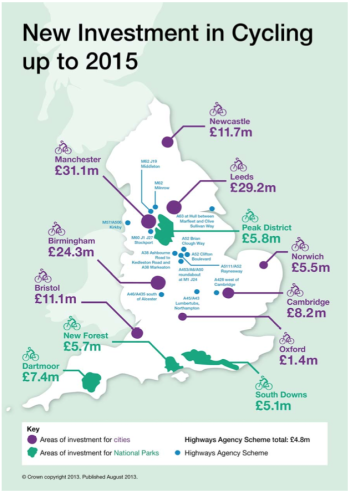 Our Dave appeared to be promising us new cricket pitches for fracking this week – if we want them – but was far less generous with his announcement of cash for cycling. The nearest it gets to us is Oxford; precisely where OCC currently spends most of the county’s minuscule bike budget.

The new investment is being focussed, which is good, otherwise the (very approximately) £150 million over two years would be spread so thinly it wouldn’t stretch to an innertube each.

A direct comparison with investment to improve motor vehicle infrastructure shows us just how seriously the treasury takes cycling. If Dave were to pace out the road investment from his constituency office in the High Street to the threatened post office in Market Square, he would have used up his bike budget after the first two steps.

If he jumped on his bike and tried riding back on a Friday afternoon he’d be stuck in the traffic jam with all the motor vehicles trying to exit the centre because there’s no space for cycling. That’s why his constituents are all sat in cars. The only way it could be made worse is if Pickles’ double yellow parking plan were implemented, bringing the High Street to a complete standstill.

It can be difficult to tell the difference between big numbers – millions, billions, zillions, squillions – so let’s look at the £1.4 million figure announced for Oxford. It happens to be almost identical to the sum being spent on the Ducklington Lane junction improvements. If you’ve looked at the junction proposal you’ll be aware that there’s NO bike access planned to either the Thorney Leys Business Park or to Avenue One off Station Lane. It’s as if money put aside for road improvements can’t be spent on rectifying the historical lack of space allocated to cycling.

Dave has a solution to that – investment in ‘cycle proofing’ designs for trunk road junctions – which is good, but as described wouldn’t apply to the Ducklington Lane improvements.

I’ll leave you with Dave’s words because they’re far more positive and inspiring than what I can see being provided for Witney’s bike users. Why not ask him what he’s doing for his West Oxon constituents?

“Following our success in the Olympics, the Paralympics and the Tour de France, British cycling is riding high – now we want to see cycling soar. Our athletes have shown they are among the best in the world and we want to build on that, taking our cycling success beyond the arena and onto the roads, starting a cycling revolution which will remove the barriers for a new generation of cyclists.

“This government wants to make it easier and safer for people who already cycle as well as encouraging far more people to take it up and business, local government, developers, road users and the transport sector all have a role to play in helping to achieve this.”

On the bright side, I imagine we’re far more likely to see money invested here for cycling than fracking.