My day out in Bath as a Sustrans quality control technician…

With a to do list sagging under the strain of new documents landing on it, I did the sensible thing and allowed myself to be sidetracked by the latest Sustrans barrier design. Initially I was incredulous – hasn’t my (admittedly tiny) contribution to the sustainable transport charity’s barrier bureau been used to conjure up enough ways to disadvantage disabled bike users? Apparently not.

As far I can tell it doesn’t have a name like york-chicane or A-frame so I’ve christened it the skillard: (n) a collection of bollards in a skittles formation requiring additional skill to negotiate.

I imagine they’ll be scalable, so rather than the skillard5 seen here a skillard7 would be used on a wider path and, as I discovered, a skillard4 on a narrower path.

Then a chance encounter with Tyne Tom in Leeds pulled me up short. He put the new cycle-friendly design handbook it’s taken from into some context, and explained the issues around trying to limit speed on bike paths which is the primary purpose of this new barrier – it’s nothing to do with motorbikes – along with the problems encountered when trying to get a desired solution accepted by a local authority. Like the boy named Sue, I came away with a different point of view.

I put aside my experience of riding in the Netherlands where obstructions are rare, and conceded that a skillard is probably less restrictive than overlapping gates for trikes, handbikes, tandems etc. To reach a rational conclusion I decided to have a go at calculating if this new barrier design is compatible with the spec we’ve been developing for a Standard Inclusive Bike.

But the description of the skillard is a little vague: “2 rows of staggered bollards. 1.5m between bollards, 5m from junction”. To make sure I was evaluating the right thing I wanted to answer the question: is it a 1.5m clear gap between bollards or 1.5m between centres? Recalling a tweet in my favourites giving the location of one in the wild, I packed a tape measure and set off to find out.

On the way from Bath Spa station there are reminders of both, how barriers once installed appear to be set in concrete forever… 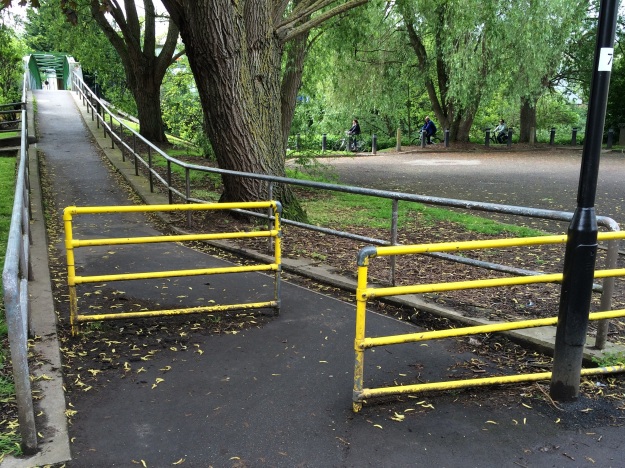 …and how sometimes, between barriers, you might for a moment think you were in a cycling paradise across the North Sea; the worst and the best of the NCN within just a few turns of a crank.

And on to the business at hand. The junction between Inverness Road and Bellotts Road forms a crossroads for people on bikes and on foot. This is the view looking south from the centre of the crossroads and is the same view shown in the tweet above. The good news: the holes for the second row of bollards have been filled in and the two outer bollards have been reset further out. 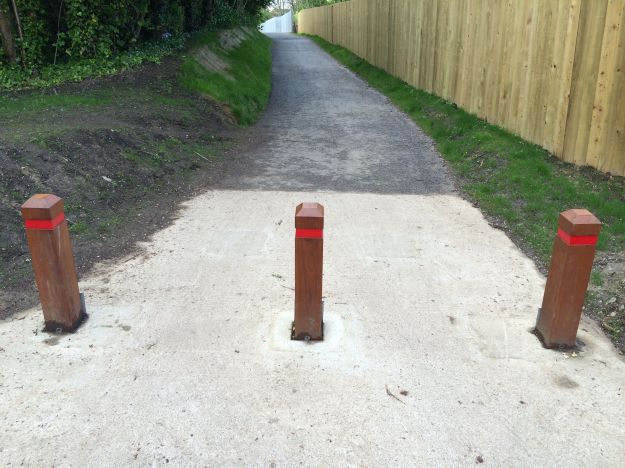 The bad news: it’s neither a 1.5m clear gap nor is it 1.5m between centres, it’s a narrower 1.2m clear gap give or take a couple of centimetres. The wooden posts are 143mm square. So what was it before they were moved? More of that in minute. 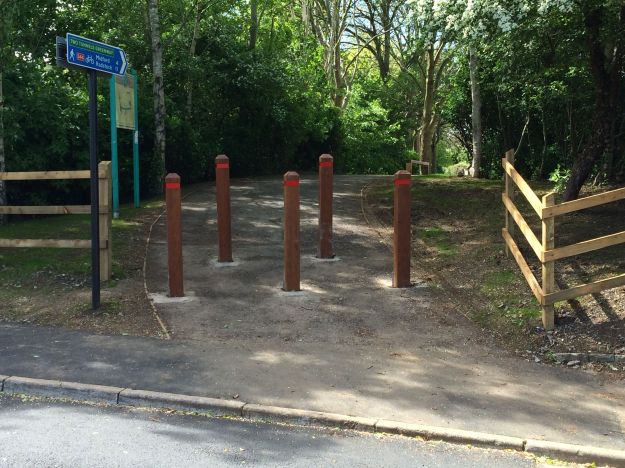 It’s on what feels like a 1 in 4 slope, on a curve, way closer than 5m to a junction with no drop kerb, and to top it all a clear gap between bollards of no more than 1.05m. I’m guessing that was the spacing initially used at the top of the hill.

I struggled to wriggle through it – there must be an MTB technical difficulty rating applicable to this – and if someone on a trike attempted it I think they would tip over as they turned across the slope. A hand bike could well end up stuck with the rider helpless to reverse up the steep incline to make adjustments. Coming down the hill in a wheelchair with just your hands as brakes would make for an interesting experience. Quite the challenge.

So where did that leave my evaluation of the compatibility of the Standard Inclusive Bike and this new barrier design?

In a state of confusion. I didn’t find the answer to my original question and all I can say is that if it were a 1.5m clear gap between bollards it might well be sufficient, that if not it probably won’t be, and that based on the 2 different implementations found shouldn’t a tolerance of -0.5m (-33%) be introduced into the manual?

I don’t believe it was a wasted journey though. Looking at it from a user’s perspective, particularly a user of an inclusive bike, it demonstrates that Sustrans has a quality control problem. One that is so endemic I think it prevents the organisation from meeting the needs of its users and its charitable aims when it comes to access for all.

I can’t find a Sustrans Quality Manager or Director of Quality to contact. In fact, I couldn’t find any information about who’s responsible for what on the website. If I could I’d ask…

If the answers to these questions were yes, anyone could go into a bike shop knowing whether the bike they were about to buy was ‘NCN compliant’ and exactly where they could and couldn’t use it – get quality right and equality is sure to follow. It should be that simple.

But it isn’t. As I understand it Sustrans has little or no control over its network; it’s a hostage to the preferences and prejudices of each and every landowner and authority it has to deal with. Ranty put his finger on the reason Sustrans has produced its own design manual and based on my experience of parts of the NCN I can’t help wondering if it’s worth the paper it isn’t written on.

A position within Sustrans Quality Control department would be many people’s idea of a dream job – riding the NCN all day, towing a trailer measuring the network’s parameters as they go – but what good will the data be until it can be acted upon?

Without a government endorsed national standard for cycle infrastructure that applies throughout the country, can Sustrans ever get away from ‘local conditions’ compromising its charitable aims? Will it ever achieve a consistent standard of quality across its network? Will it ever be inclusive?

Lots of questions. Here’s one more: Who can answer them?