You’ve heard of the record attempt for how many people you can fit into a mini? How about how many people, limbs, wheelchairs and baggage you can get into a 6 bunk dorm which even when empty only has a walkway wide enough for one person at a time. Now imagine everyone’s finally managed to clamber into their bunks – and 5 minutes later the one at the end needs a leak…

So, after a very cosy night at Penzance Youth Hostel we hit the road for the first real day of cycling. As expected, if we weren’t going up we were going down – plenty of “scenic opportunities”. Spent some of the day barrelling along at 20mph (and that wasn’t downhill) behind a “stealth” handcycle (see the pictures below). Dave, a Scarborough lad now living and working in Cheltenham, bought it in Germany. It really is astonishing how efficient it is – and he’s far from the slowest up the hills. Impressive. A couple of people have been slapping on ‘jollop’ for sore bits but otherwise everyone’s holding up. Tomorrow Tavistock… 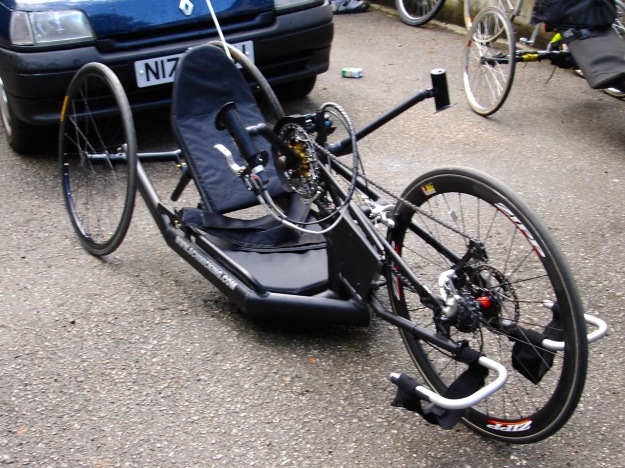 I’m still searching of for the precise route we took, but some of the pictures are easy to place like this one of Jim Bush, Richard Lamb and Nathan Smith in Marazion.

And a giveaway view of St Michael’s Mount on a sunny summer morning.

We crossed the River Fal (hence Falmouth) by ferry at Trelissick which turned out to be quite a good ruse – a captive audience to take the DBF collection buckets around. Mechanic Nigel and Carol on the ferry. 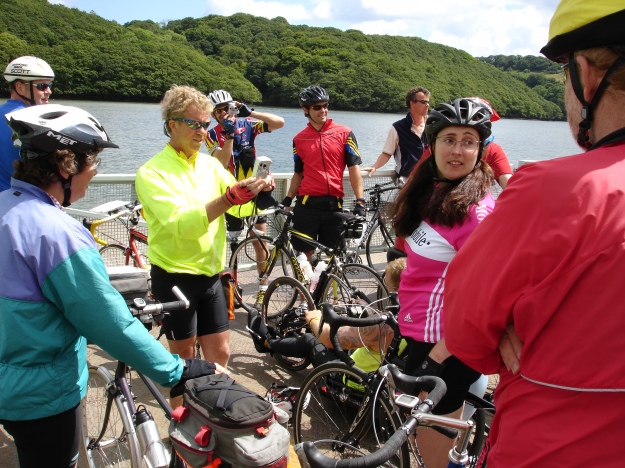 If you don’t know it, the climb up from the river on the other side is pretty brutal and since you’re on an incline as soon as you come off the ferry the difficult part from my point of view was ensuring I had a clear path and didn’t have to stop on the climb – hill starts on slopes that steep are very difficult to do and can mean having to roll down to clip in again if  there isn’t a convenient post or wall available. With a whole gaggle of riders, cars coming off the ferry, and cars coming down the hill to the ferry, it took some concentration. In comparison the rest of the ride to St Austell was straightforward, and the White Hart Hotel proved to be a great hostelry.

Left to right in the Bader Team T-shirts with White Hart staff are organiser Kiera and support crew Shona and Emma.

Wish I could credit the pics because they’re not mine but I have no idea whose they are!

And the route – gpx available here.