With the ferry back to the mainland to catch at 0815 there was some very hasty packing to be done in the morning. It transpired that our washing from the night before had become mixed up with another group’s at the youth hostel and my £20 cycling mitts I’d bought the week before had transformed into a pair of baggy old Y-fronts – I know which I’d rather do without!

After the ferry to Claonaig the ride was split into two parts. A fast flat section in the morning following the waters edge along the A83 to Lochgilphead, and a slower (surprise surprise) hillier section in the afternoon to Oban through Trossachs National Park. We were treated to firs, heather, deer, peaty streams and craggy bits.

Spared a thought today for the riders in the Tour de France, everytime we came to a hill my quads began to burn after about 30 seconds. Thank God we’re not in the Alps!

Another fantastic view from the Youth Hostel – a complete panorama of Oban Bay – accompanied by a 30mph wind when hanging on to the railing at the sea wall. This had whipped up fairly soon after our arrival and made the photoshoot with the local paper a fairly grim affair.

Rob’s companion, Walnut, had a close call today. He travels in Rob’s rackpack and comes out for photoshoots at national landmarks en route. He’s been the subject of a couple of kidnap attempts and the safety harness created to prevent these came to his aid today… 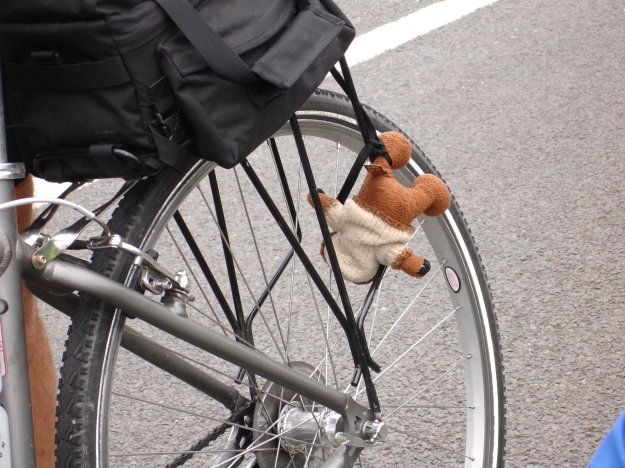