There’s a guy I see most weeks rides an old Raleigh Twenty Shopper around town. Like everyone else doing their own thing around town, once he’s parked up you wouldn’t know whether he’d walked, ridden or driven there, unless you happen to take a particular interest in people that ride classic british utility bicycles. Should that be allowed? To remain anonymous I mean.

Many think not, and what’s becoming most disturbing to me is that it appears to be some of the self identifying champions of ‘cycling’ who are the most vociferous in calling for mandatory measures to make people on bikes stand out in the crowd. I’ve got a theory about the tension between an individual’s natural desire for self preservation and the negative effect that has on the group of individuals as a whole – it’s like an arms race where apparent gains are wiped out by an accelerating mutually assured destruction – but it doesn’t explain why someone would care about a stranger’s wellbeing at least as much as their own. What’s in it for them?

Is it about fairness? Hell, if I’ve got to carry around all this extra stuff and stick out like a sore thumb then why shouldn’t you?

Is it about trial by association? Those people jumping on bikes and going places without a second thought are giving me a bad name. Make them stop it!

Is it about personality? A certain proportion of the population are intrinsically rule based – everything would work perfectly if everyone would just follow the rules all of the time. Which while being undeniably true is also a never ending source of disappointment for those afflicted with it on account of the rest of the human race being round pegs. Creating a law to force people to follow their rules would surely solve the problem.

Whatever it is, it’s a distraction. The question we ought to be asking is is it desirable, is it even possible, to get large numbers of people to dress in a particular way most of the time?

Looking around, people who are required to wear some form of identifiable clothing are either paid to do so, are participating in a sporting activity, are children, or are being persecuted for political ends. One of those is usually backed up by the use of a police force to coerce compliance.

If we’re at all serious about making bikes a useful decongesting mobility aid for the short journey, the very niche where it has the most chance of success, we need to start with a common understanding of what normal and convenient is along with some measures to ensure that convenience doesn’t come at the expense of an unacceptable increase in risk of injury.

A solution predicated on discrimination won’t work and isn’t worth having. If we can agree on that I can get on with part 3 of Using a Bike for Short Journeys. If we can’t, you’re wasting our time.

Lights, locks and luggage – how to match your bike to your life and make it at least as convenient as the alternatives…

In the mid-noughties I spent a year living and working in a german town just north of Nuremberg. Even for Germany it’s quite a special place from the point of view of cycling and at that time had a modal share of 33%, meaning a third of all journeys in the town were being made by bike. One of the first things to strike me, other than the bikes when I strayed onto the cycle path, was the sight of men riding bikes with baskets. Years of social conditioning caused my cultural compass to spin everytime I saw a basket not paired with the fairer sex. What was it all about?

END_OF_DOCUMENT_TOKEN_TO_BE_REPLACED 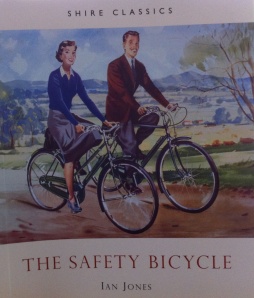 It’s convenience, or rather the lack of it, that explains why someone who regularly does a 60 mile ride at the weekend, or commutes 15 miles each way to work all week, will choose to jump in the car to pop into town. Sounds absurd on the face it, surely a journey of 1 or 2 miles is easier than slogging your way over the Cotswolds? And of course it is, if you ignore all the phaffing around that goes with it.

This from the most recent research into using a bike in the UK, Understanding Walking and Cycling…

“It is often assumed that short trips could easily be made by bicycle or on foot (e.g., DfT, 2011 pg 5), and the statistics suggest that there are many short trips that could be converted. According to the National Travel Survey (2010) 36.1% of trips under 2 miles and 53.0% of journeys under 5 miles are undertaken by car, with walking accounting for 23.4% of all trips and cycling only 1.5% of all journeys.”

It’s not just distance that differentiates short local journeys from long fast clubruns; one is all about the ride while the other is about the purpose. More than about 5 miles and the time spent on the bike begins to dominate, less than 5 miles, or about half an hour, and it’ll be what you do when you get there that counts. You’re no more likely to clip clop into a restaurant in a pair of budgie smugglers and a shirt colourfully advertising a bank in foreign climes than you are to turn up at the start of a club run in a suit and tie. For a town like Witney it’s a mere 10 minutes from the outskirts to the centre – hardly worth getting changed for.

There are exceptions at either end of the cycling community. I have friends who virtually live in lycra and go everywhere by bike, and equally I occasionally nod to old guys in woollen blazers and brogues riding miles from anywhere, but valued members as they are of that risible 1.5% of journeys undertaken by bike, they’re the bookends of a missing bell-curve that could and should be mass cycling in the UK.

More from Understanding Walking and Cycling…

“For instance in Sweden and Finland 9% of all trips are by bicycle, in Germany 10%, in Denmark 18% and in the Netherlands 26% (Pucher and Buehler, 2010). The research reported here suggests that assuming trips (in the UK) could be undertaken by bike or on foot just because they are short is a rather simplistic approach that fails to fully understand the nature of the problem.”

When I go to the Netherlands and look at the people riding bikes there, just focussing on the people and their bikes rather than the environment they’re riding them in, I see the occasional helmeted roadie on a carbon framed racer, the rarer off-roader on a fully suspended MTB, but obscuring these are masses of people riding relatively heavy machines wearing nothing you’d find between the covers of Cycling Plus.

When it rains I see umbrellas. I’ve tried using an umbrella and it’s not easy in a forward leaning position. Sit upright though and controlling the bike one handed isn’t a problem. In fact everything seems to just work on an upright. Sure you can splash out on a Brompton jacket with darts in the back giving enough room to stretch into an aero position, but that kind of negates having a whole wardrobe to choose from when going out.

Has the technology revolution in bike design made the short journey any easier? Does a 20% weight saving give any significant advantage on a 10 minute journey? Is the electronic derailleur mech going to make my trip to the cinema any better?

Seems to me everything that makes using a bike for short journeys more comfortable and convenient was sorted out before the outbreak of the Great War. Hub gears, mudguards, chain guards, skirt guards, comfortable steel frames, the wicker basket. While since then every technological advance to make going further, faster easier has made the short journey more uncomfortable and inconvenient.

The people using bikes in the Netherlands that give cycling a legitimate voice aren’t ‘keen cyclists’ or ‘cycle enthusiasts’, they do it because it’s been organised in such a way that it’s convenient. As our mega-fit mile-eater we started out with demonstrates, promoting ‘cycling’ doesn’t make using a bike convenient and is doing little to resolve the short journey conumdrum in the UK.

I’m glad to say it’s not a secret here. Not everyone’s conforming to what is ‘normal for the UK’. Our arty bike stands at the back of the Woolgate have a steady stream of snappily dressed bike users coming and going with their shopping. Mostly women. Even more in Oxford ignore the advice of cycling experts and are discovering for themselves what works, or just carrying on a tradition that hasn’t died out yet. They’re the ones doing most to promote the bike’s supremacy for the short journey.

I read the other day that the classic dutch bike is based on the british roadster. Oh Raleigh. Where did it all go wrong?