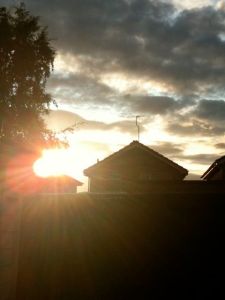 I wasn’t surprised when the salesmen kept feeding us the same old line, “Forget solar hot water, just cover the roof with Solar PV”. By not mounting a solar thermal collector for hot water we can fit an extra couple of Solar PV panels on the roof equating to roughly 400kWh*, or 400 units, of additional electricity generated per year. In monetary terms that’s about £170 in Feed in Tariff alone.

Financially it’s a no-brainer. The FiT means you would need to be using an awful lot of hot water to achieve that kind of financial saving from a solar hot water system. And the payback period on Solar Water is far longer than with FiT boosted Solar PV.

What really bugged me though, when I said we’re not only in this for the money but to reduce our overall energy consumption, was the insistence by some salesmen that fitting Solar PV in place of a Solar Hot Water system results in a lower carbon footprint overall.

In terms of energy, the relatively low efficiency of current Solar PV panels of around 15% means it can’t be used to heat more water than an equivalent area of solar thermal collector. Full Stop.

There is an argument to be had about which energy source is used to heat the water and its equivalent carbon emissions, but since they where suggesting we use the solar PV energy to heat our water during the day anyway, let’s not go there.

We stood firm, requesting quotes for both Solar PV and Solar Hot Water on the roof.

Then we had British Gas round.

While getting quotes for the solar stuff we’ve also been getting quotes to replace our 17 year old boiler, the pilot light of which burns about 3 kWh of energy, alone, everyday. Using The Carbon Account over the past year or so, it’s clear that the gas we use, the red layer in the graph, is the major source of emissions and energy use in our household, so getting a more efficient boiler is another no-brainer.

The BG guy challenged us that we’d be better off with a combi boiler. It’s a much simpler system, doesn’t require a hot water tank and produces hot water on demand – “you only heat what you use”. How many heating systems in Great Britain I wonder have a program running which is heating water twice a day just in case it’s needed? With a combi boiler there’s no need to predict half an hour or more ahead, you can walk in anytime of the day and it instantly heats only as much as you need.

The immediate downside of this approach is that combi boilers are not generally compatible with solar hot water systems. So we went through the relative merits of the different systems, um’d and ah’d for a while, until finally I concluded that the only way to decide which suited us best was to figure out how much hot water we actually use.

Measuring the hot water consumption wasn’t too difficult. I measured the flow rate of the shower by using my phone to time how long it took to fill a litre jug. Then when the shower was in use we measured how long the water ran for and calculated the number of litres using the flow rate. For the bath I just set the tap running and used a pair of litre jugs alternately to count out the litres.

It worked out at roughly 20 litres per shower and 80 litres for a bath. It has to be said that we use an on/off/on approach to showering – getting good and wet, turning off to lather up, and then on again to rinse. This is with a shower head that you can hold and point at the plug hole to avoid that initial colder blast of water.

So even with a power shower flowing at a generous 15 litres per minute it turns out that we’re pretty frugal with our hot water. Certainly well within the capacity of our hot water tank that holds somewhere between 100 and 120 litres.

And that’s when it struck me. Not the hot water tank itself, but the fact that it has always been sufficient. Even through our family of four period we didn’t find the size of the tank to be a problem. However, every plumber and solar water quote recommended that when upgrading to the twin coil water tank necessary for Solar Hot Water, it should also be larger to make the most of the solar energy.

Using the rule of thumb in the CAT Solar Water Heating info sheet, throughout a year about 50% of the water in a UK solar hot water system will be heated by solar energy, the other 50% being heated by the boiler. If we increase the size of our water tank to the suggested 210 litres, we’ll still be using the boiler to heat our water 50% of the time, and there’ll be almost twice as much water to heat.

So doubling the size of the hot water tank to utilise more of the sun’s energy means we’ll be using just as much energy from the boiler as we’ve always used. More hot water, but no energy saving! Fitting a bigger water tank is just plain wrong.

I imagine dishwashers and washing machines are fairly common place now, both have a cold water fill and heat the water themselves, hopefully A-rated and set to an economy setting. Apart from washing the bike or the car every now and then, there just isn’t as much demand in a home for hot water “downstairs”. And given that fresh water is a resource that should be conserved too, it’s hard to see the rationale behind heating as much water as you can using solar energy, just because you can.

Having looked at how many baths and showers we take, and knowing how much hot water we don’t use most times a whole tank is heated, it turns out the man from British Gas was right, even compared with our existing “dinky” hot water tank, a combi boiler is the most economic and eco solution for us.

So perhaps the mantra, “Just cover the roof with Solar PV Guv”, if not for all the right reasons, is in fact the right approach.