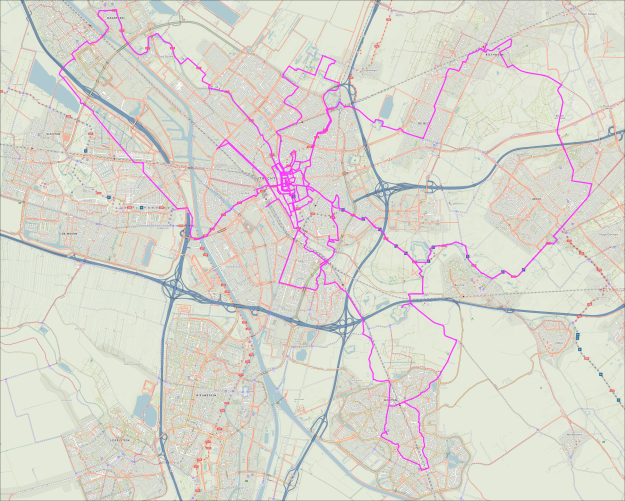 Our fuchsia trail traces out part of the cycle network in the city/province of Utrecht. It’s only a small part. Even if it hadn’t snowed the first two days of our trip it would still be a small part.

Zoom in and the red lines indicating cycle infrastructure become apparent, as does the rail network, the waterways, and the complexity of the motorway junctions. When I’m in the Netherlands I rarely come into contact with the major road network, and when I do I’m almost always surprised by how comparatively quiet it is when riding next to or looking down on a section of it. My experience as a user is confined to the rail and cycle networks which are often busy, and where the two networks meet in Utrecht is the busiest bike path in the country: “The three busiest cycle paths in the Netherlands are in Utrecht according to the Cyclists’ Union. Smakkelaarsveld tops the list.”

Far less busy is the new bridge just to the south of the station. It’s nice and wide but is essentially a footbridge with a smallish roll-in-roll-out lift at either end. Accessible, but time will tell as to to its ranking on the Fietserbond list.

We stayed in the centre where most people seem to use a bike to get around. There are parked cars wherever space exists for them, but the space is limited so it’s just not possible for everyone who could drive to have a car parked where they live. We saw quite a few car club/share vehicles in the area, paid for with the public transport OV chipcard. Yet despite that I was surprised to see a piece in the local free paper asking: “Is more space for cycling an improvement?”

Riding out of the centre we experienced a variety of infrastructure. I was using the Knooppunt system for navigating – jotting down a series of numbers and following the signs, so we were always on an officially sanctioned cycle route, but places like De Bilt and Zeist felt way below par in terms of separation from traffic. I didn’t get to see much of Zeist, so perhaps that’s an unfair judgment. Or perhaps Zeist really is more car dominated because it has no rail link and a lack of local employment? It certainly felt more car dominated, but I think that was largely down to the design and my subsequent reaction to it.

In contrast, the ride out to Houten was a joy. There have been some improvements since we were last there in 2011, notably the buildings around the southern station Castellum are complete now and a level crossing has been replaced with an underpass on the way to Utrecht. Planned around a train line running through the centre with two stations, the way the cycle network and the car network have been largely separated, and the care taken where they interact, means this is the most stress free urban cycling experience there is. And unlike Milton Keynes, navigation is a breeze.

We didn’t get to experience much of the new Leidsche Rijn development to the West, be interesting to see how that compares with Houten. Something for next time.

One last thing from the local paper. A picture showing how much space those motorway junctions take up, and incredibly, there’s a plan to widen that part of the A27. It seems the motorway network has reached capacity around Utrecht, and the transport department has decided more space for driving will be an improvement.